Distinguish Between Law , Morality And Customs 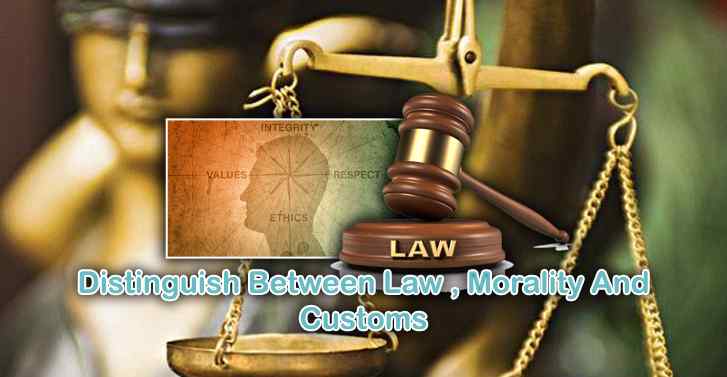 On a frequent basis, we come across law , morality and customs .Have we thought if there is any difference amongst the three? Indeed , there is difference .

Laws are so made to demolish wrongs , crimes ,malpractices and other wrong actions and to bring peace and harmony in society. These laws are enforced by the State and violators of law are subjected to punishment ranging from mild to extreme by the State.

But there are no laws for being ungrateful , not helping the weaker sections of the society or for greediness and so on. Laws punish those persons who go against the law through their external actions. There are law enforcement agencies to enforce the laws and ensure the citizens of the State follow the laws and do not violate it.

Laws are specific and applicable to all citizens of the State . There are laws which are universal and require all nations of the world to follow it called International laws.

So what we can say about law is that it is an array of rules set to govern the behaviour of person or a group of persons. Laws are made on purpose to establish tranquillity and order in the society. But laws can be changed in order to counter emergency.

But as per the varying circumstances , laws are also modified to adapt to that situation by the concerned authorities of the State. Laws do not disappear just like that unless they are abolished by the recognized authorities of the State. Laws are defined set of rules and cannot be changed as suited for each person . These defined rules are applicable to each and every person alike.

Customs are a set of procedures which grow gradually with the passage of time and are not enacted expressly nor have any authority to enforce it. There are no punishments given by State for not following the customs or violating it .

There are no clear defined lines for customs nor it is written down in any book or so . Customs of every region differs and it is followed from generation to generation .

Customs cannot be modified instantly . They are normally fixed and have permanency . So , in times of emergency , customs cannot be changed at all of a sudden.As with passing of time , customs slowly disappear and does not need to be abolished.

Customs come into being as a result of experience of forefathers and relates to the normal routine of life . There can be customs which may not rhyme with the changing situations , then such customs do get abolished and some customs get reformed by laws.

Morality are a group of principles and values of a person which differentiates between what is right and what is wrong. They are ideal values and good standard of morality has to be maintained.

Moral values are not universal and so violating moral values does not cause a person to be punished physically . These values are mainly related to the internal and external affairs of a person .

Violating moral values like saying lies or being not grateful to a person , showing disrespect to a person and such other internal affairs of a person are not crimes but are regarded as sinful mistakes or sins.

There does exist difference between law , morality and customs.