Judicial System Not Easily Accessible To The Common Man.... 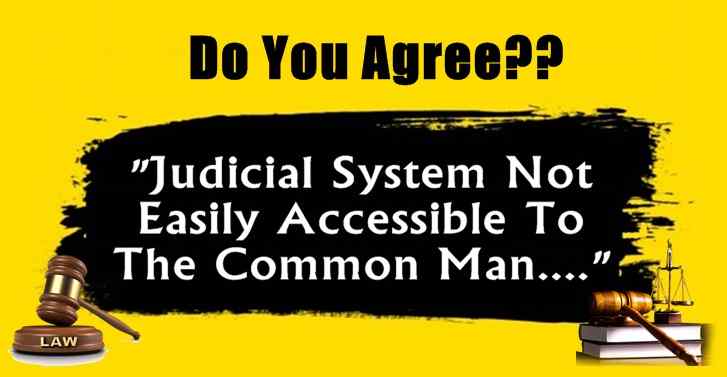 Judicial system not easily accessible to the common man....

The Judicial system has been so diluted by the bureaucrats that it is not easily accessible to the common man.Â Superior officers when considering the complaints of the common man against the subordinate officers, are just doing the role of defense lawyers instead of redressing the grievance of the common man against the bureaucrats and their brokers. However, the superior officers get their unlawful work done from their subordinates by blackmailing them on the basis of the complaints received against them. The victims are further victimized and, therefore, stressed whereas the offenders are blessed by their superiors.

The bureaucrats have conspired to convert the courts of law a place where private parties can quench their ego so as to enable the corrupt bureaucrats to go scot-free.

Victims feeling unsafe in view of bureaucratic atrocity, are getting scarred of even approaching courts of law. In the absence of protection to the life of victims and witnesses, the justice delivery system has also become ânot easily accessibleâ to the common man. The common man is, therefore, suffering from stress-related diseases and forced to die a sudden death either natural or unnatural. The most unfortunate thing is that the fourth estate of democracy, i.e. press is also managed by the corrupt bureaucrats to report false news against those who raise voice against the bureaucratic conspiracy.

Note:- We try our level best to avoid any kind of abusive content posted by users. Kindly report to us if you notice any. This report may be copied from a news/channel/magazine/blog/site for knowledge sharing, where PathLegal DISCLAIM any ownership of the content posted and offer NO warranty about the data. In case of any objection, please do write to [email protected]