The Broken Window Theory Of Violence 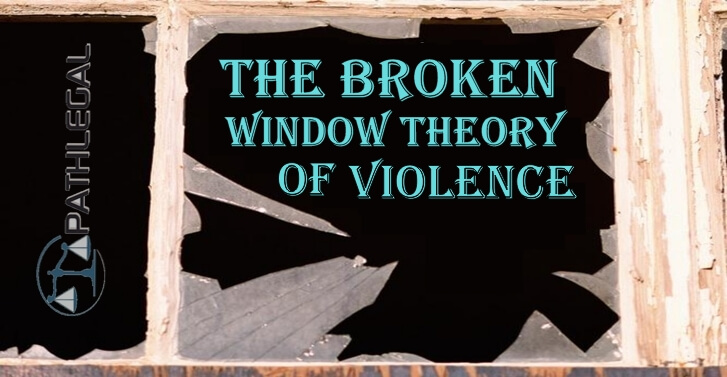 Many legal professionals assume that violence is mindless. That is, it happens and then if there is behavior that is against existing laws, itâs a crime.

What kind of crime is then determined according to various Sections of particular laws. While the motivation for the commitment of the crime will certainly be mentioned by the prosecution or the defense, less common is an understanding of various kinds of violence is involved.

The police investigating a crime will have opinions and evidence about why particular violence has occurred.

Yet theory about how violence occurs, how to prevent violence to the greatest extent possible, and what the best methods of policing are still more the territory of academics than legal professionals, Judges, and Police.

According to Dr. Sarah Accomozzo, an anthropologist writing in the Journal of Human Behaviour in the Social Environment, current theories of violence should be in the post-modern thinking. In practice, all too many legal professionals, Judges, and Police have their thinking grounded in founding theories that are now long out of date.

Looking at one theory as an example, the Broken Windows Theory was proposed by political scientist James Q Wilson and criminologist George Kelling in 1982. The term âbroken windowâ was used as a metaphor for disorder within neighborhoods.

This theory links disorder and incivility within a community to subsequent occurrences of serious crime. âSocial psychologists and police officers tend to agree that if a window in a building is broken and is left unrepaired, all the rest of the windows will soon be broken,â the authors write.

In broken window theory, if the Police maintain its traditional role as a nightwatchman against threats to order, society flourishes. But as soon as the police stop maintaining order---when vandalism and graffiti go unreported---rowdy vagrants are uncontrolled. Broken windows are unrepaired, community controls break down and serious crime has the opportunity to flourish.

A broken window is aÂ physical symbolÂ that the residents of a particular neighborhood do not especially care about their environment and that low-level deviance is tolerated. This theory influenced policy-makers around the world, especially in larger urban areas with slums.

Their response wasÂ zero-toleranceÂ policing where the criminal justice system took low-level crime and anti-social behavior much more seriously than they had in the past.Â  Here laws were enforced where people could get serious custodial sentences for repeated minor offenses, such as unsolicited windscreen cleaning, prostitution, drunk and disorderly behavior.Â

This was to lower crime levels, where lawbreakers should be served severe penalties for anti-social behavior and minor activities in order to deter serious crime.

However, with further experience, there was criticism of how the Broken Window theory of violence was applied in practice. A critique was made by Dr. David Brookes: âIf tolerating broken windows leads to more broken windows and escalating crime, what impact does tolerate police misconduct have?â

A strong, commendable desire to see that people are treated fairly when policed can be critical of allowing the police to rout persons who are undesirable by some vague or parochial standard.

Many are thus reluctant to give police the discretion to perform âa function that every neighborhood desperately wants them to perform.â

It seems that the post-modern theories of violence may already be out of date.