There Cannot Be Justice Without Truth 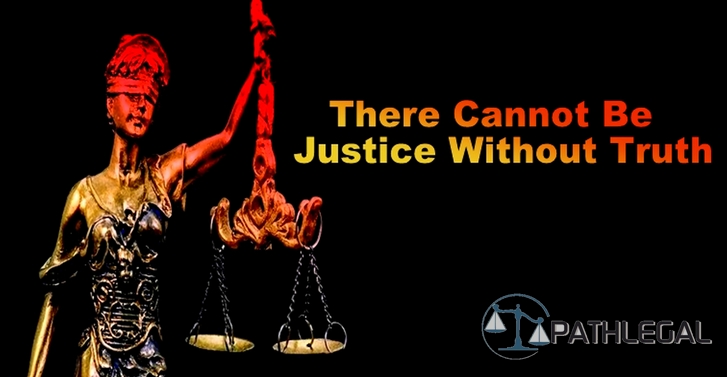 As we know, justice should be based on the truth of what actually happened. This is a major problem in Law and legal professionals because the facts of any case are usually contested. Every side has its own story and the truth is out there somewhere. Thus Truth and Justice depend upon effective search.

Truth is understood in everyday life is often elusive. What seems to be the truth on one level may only be part of the whole truth. Layers of partial truths and outright falsehoods have to be peeled away. At the end of the investigation, at the heart of the matter, there will be the truth. But the truth is not simple to capture.

Truth is according to the judiciary is the evidence in the trial. The testimony alone is an unreliable path to truth. The truth is mostly dependent on the writings made by the people who are involved. The judge may have a guess who is lying or not but he can only take decisions according to the evidence.

Lawyers---the legal professionals--- are the ones in charge with the duty to find the truth. They fail in their duty most of the time. It may often seem far too much work to search for the truthÂ  It is easier to want your side to win no matter what. This makes people not believe in the Rule of Law. Lawyers should accept that as professionals, it is our duty to bring out the truth.

Judges in High Courts or Supreme Courts tend to develop an idealistic approach to the question of truth. This can be seen in texts of judgments where truth is sometimes discussed in a style focused on literary ambitions, deeply philosophical, moral, religious, cultural, or legal opinions.

For instance, Justice Krishna Iyer, in a Supreme Court judgment of 1977 bearing on a claim for recovering a debt, wrote: âTruth, like a song, is whole, and half-truth can be noise! Justice is truth, is beauty, and the strategy of healing injustice is the discovery of the whole truth and harmonizing human relations. Law's finest hour is not in meditating on abstractions but in being the delivery agent of full fairness.â

The issue of Quid est veritas? was raised by a famous Roman king in a trial where the accused claimed that they should be believed because they were speaking the truth. Since the case involved the death penalty, the case was serious enough to bring before this Roman king, who alone had the right to order death or freedom.

Yet the witnesses against the accused were the most respected people in the country. Besides fulfilling a duty to judge according to the truth, under Roman law, the King also had many political considerations. The accused was a poor man; the accusers not only politically powerful but the wealthiest in his kingdom.

While being the King was a powerful position, freeing the accused on the basis of âhe told the truthâ would have many consequences, including appeals to the Emperor in Rome that could terminate his kingship.

Hence he decided that knowing what the truth was not sufficient to save the accused who was most likely telling the truth. Hence the saying âQuid est veritas?â

The cost of determining the truth being too expensive in his calculation of the various realities and forces at work was to wash his hands. âDo with him what you will. Thereâs no blood on my hands.â

When we look at a case it should not be just about winning. It should be about the truth winning.